I need to post more frequently on this blog, but it's been a rough day already (it's only 11:00 am and already it's turned to shit), but I figured I've got a ton of pictures I haven't uploaded anywhere, I might as well do it here. So enjoy some of my work: 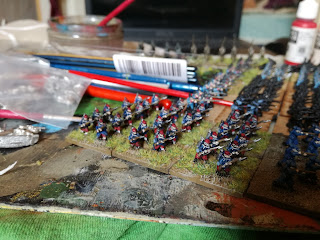 10mm French infantry, for the 1870 Franco-Prussian War. I haven't played it in more than a year, and like an idiot I sold all the models I already had for the game, but Bloody Big Battles is, hands down, one of my favourite wargaming rulesets, and I'm slowly re-building my collection here in the UK so that I can once again play. (Miniatures are from Pendraken) 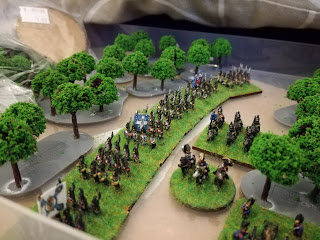 6mm Napoleonic Bavarians (from Baccus miniatures). I've painted a few of these myself, but they aren't pictured here. I've also begun to slowly build up my collection of terrain, especially smaller scale stuff for 6mm/10mm games, and here are the beginnings of what will eventually be a mighty forest. Eventually. Amazon.co.uk has a ton of really cheap, chinese made model railroad scenery. 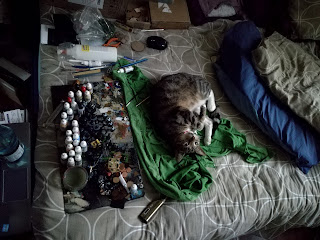 James' cat, River. She likes to hang out wit me while I paint, but sometimes she
wants 100% of my attention, which isn't exactly convenient, but IS adorable. 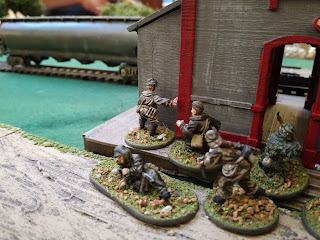 28mm WWII Soviet Scouts, painted by commission for my friend Mark. Here we see them infiltrating a railroad station in eastern Germany, circa 1945. 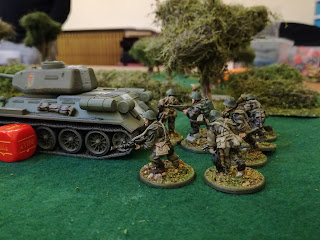 And on another flank of the same battle, Soviet Assault Engineers, Also painted by me for Mark, advancing behind the cover of a T-34 (which I did not paint.) These assault engineers are some really tough soldiers, being not only veterans with access to the best weaponry in the Red Army, but wearing body armour, which in the tradition of Ned Kelly is basically just 40+ lbs of steel plate. 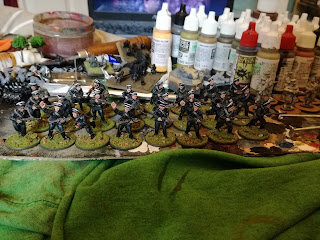 And the latest addition to Mark's WWII Russians, some Naval Infantry! These were a lot of fun to paint, since it was such a change from the drab khaki and green of most WWII uniforms. The Russian navy found itself bottled up in port for most of the war, and since the need for trained and disciplined troops was so great, some 400,000 Russian sailors would eventually find themselves pressed into service as infantry. The Germans, Hungarians, Finns and Romanians who fought against them soon gave them the nickname 'The Black Death' 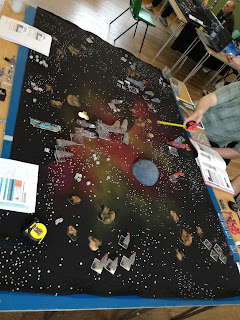